The scent of truffles lingered in the air as I walked up the steep cobbled streets to the ramparts that lined the edges of Motovun, a medieval walled town on the hillside of the Istrian peninsula in the northwest of Croatia. The view was magnificent ; the green, rolling hills were dotted with vineyards, olive groves and forests, the source of truffles.

It was the second day of my September visit to Istria – my first international trip in 17 months – and it had already exceeded my expectations. I was fully vaccinated and eager to celebrate my 40th birthday abroad by joining a friend who lives in Croatia to explore the country known for its scenic coastline and ancient walled towns.

Our first stop in Motovun was the restaurant in front of our Airbnb: the welcoming stone terrace of Konoba Mondo. I ordered a delicious penne with Sicilian pistachio and Istrian prsut, a raw ham. After a bite, my friend exclaimed that the creamy parmesan and black truffle polenta she had ordered was the best meal of her life.

“Istrian cuisine is very similar to Italian but heavier,” says Klaudio IvasiÄ‡, owner of Konoba Mondo, who uses his grandmother’s recipes and still lives about 20 meters down the street, in his house. childhood. He says the key ingredients are homemade pasta, polenta, Mediterranean spices such as bay leaf and rosemary, and the famous truffles, which come from the forests around Motovun and the nearby towns of Buzet and Livade.

The regional cuisine also offers unique local pastas such as fusi, a flat, square noodle rolled up to almost resemble penne, and pljukanci, which are short, thick, twisted noodles. Pasta dishes are often served with prsut, boskarin (local longhorn beef), wild asparagus, and seafood in coastal areas. Another integral part of cooking is wine, which is most often made from Teran (red) or Malvazija (white) grapes.

Because Motovun is tiny, we spent our days exploring the interior of the peninsula and the narrow, winding roads by car. Although each hill seemed to be topped by a medieval town or abandoned castle, I never got tired of either. We wandered through the ruins of the castle of Pietrapelosa; the streets of Hum, the self-proclaimed smallest town in the world; and Dvigrad, the largest complex of medieval ruins in Istria, destroyed by multiple sieges and the plague. In between visits, we sneaked into an olive oil and wine tasting at Ipsa, a family business with a shaded patio overlooking the vineyards, and learned about the complex identity of Istria.

When I arrived at sunrise to photograph the city of Rovinj, for example, the scene could have been mistaken for Venice. I set up my tripod and waited for the sun to highlight the Italian steeple on a hill above a row of colorful buildings lining the water. The resemblance to Venice (if I had removed the hill and added a few gondolas) was no coincidence; the Republic of Venice ruled this coastal city for five centuries.

After the end of Venetian rule in the 18th century, its influence remained in architecture and culture. The winged lion of St. Mark, the emblem of the Republic of Venice, was a common sight in Rovinj and throughout the peninsula. The cobbled streets and clotheslines hanging from the balconies made me nostalgic for Venice, which I visited as a student in the early 2000s, on my first trip to Europe – a trip that would later trigger a life and a career as a traveler. Two decades later, I wandered the streets of Rovinj with the same wonder at the elaborate architecture, clicking my camera shutter on every corner.

Aside from the architecture, the other element that Rovinj shares with Venice is the crowd; the streets were full of tourists and vendors selling paintings and other trinkets. Every cafe was overflowing at sunset. I naively thought that by traveling after peak season I would miss the crowds. Because Croatia is open to travelers who meet vaccination or testing requirements, this was not the case. As an added safety measure, I only dined outside and wore a mask inside and focused on outdoor attractions.

For a more in-depth look at the tangled history of the region, I contacted Wollfy KrasiÄ‡, Assistant Professor in the Department of Croatian Demography and Emigration at the University of Zagreb.

â€œToday Istria undoubtedly has a Croatian identity but also a strong regional identity, which is due to the fact that although the Croatian population has been numerically predominant in Istria for centuries, Istria was not part of of the Croatian state (as part of communist Yugoslavia) until the end of World War II, “KrasiÄ‡ wrote by e-mail.” As for the most famous cultural monuments, they were created in the Roman, Byzantine and Venetian times, although there are exceptions. “

Italian heritage is an integral part of regional culture. KrasiÄ‡ points out that seven towns and 12 municipalities in the county of Istria are officially bilingual, which means â€œnot only bilingual road signs or the presence of schools where the language of instruction is Italian, but also the translation into Italian of all official documents of the administration. “

I have often spotted these bilingual road signs in small hill towns such as Groznjan and in Pula, the largest town in Istria County. Signs along major highways were also in both languages. One of the most interesting examples of this heritage was in the center of Pula, an important outpost of the Roman Empire known for an amphitheater built around the same time as the Coliseum in Rome. The Forum Square, which has served as the city’s main square since the reign of the Roman Empire, is home to the ruined Temple of Augustus, built during the reign of Augustus Caesar. The temple stands next to the medieval town hall which displays the flags of Istria, Croatia, the European Union, and Italy – a visual representation of Istrian identity.

I spent my last night in Istria pondering the intricacies of the region while searching for the perfect place to dine in Rovinj. My friend had left earlier today to return to the city of Split in southern Croatia, and I managed to find one at the last minute at La Puntulina, a Michelin-rated restaurant. Its photogenic terrace, which spans the rocks by the water’s edge, is the city’s most coveted dining spot. The fusi boskarin pasta was one of the best meals of my trip. 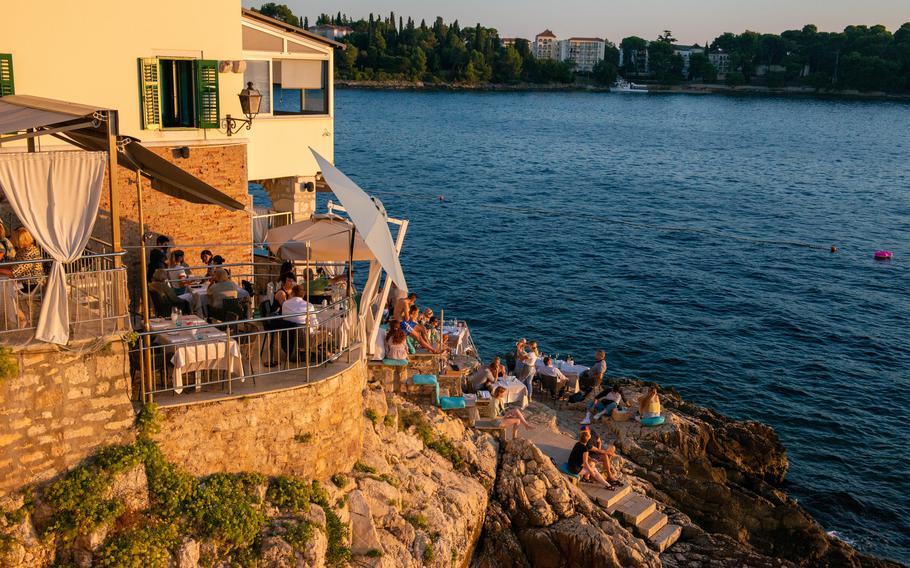 La Puntulina is a Michelin-rated restaurant in Rovinj, Croatia, famous for its terrace that covers the rocks along the waterfront. (Anna Mazurek)

While the historical influences are evident, Istria, like the rest of Croatia, has a distinctive culture apparent in everything, including the food, wine, and the extremely friendly and welcoming people – like the determined hostess who gave me prepared a makeshift table. with a perfect view of the sunset at La Puntulina. As the sun slowly crept into the clear blue water, I sipped a chilled glass of Teran – a dry red wine – happy to travel again despite the crowds and already eager to return to Croatia. 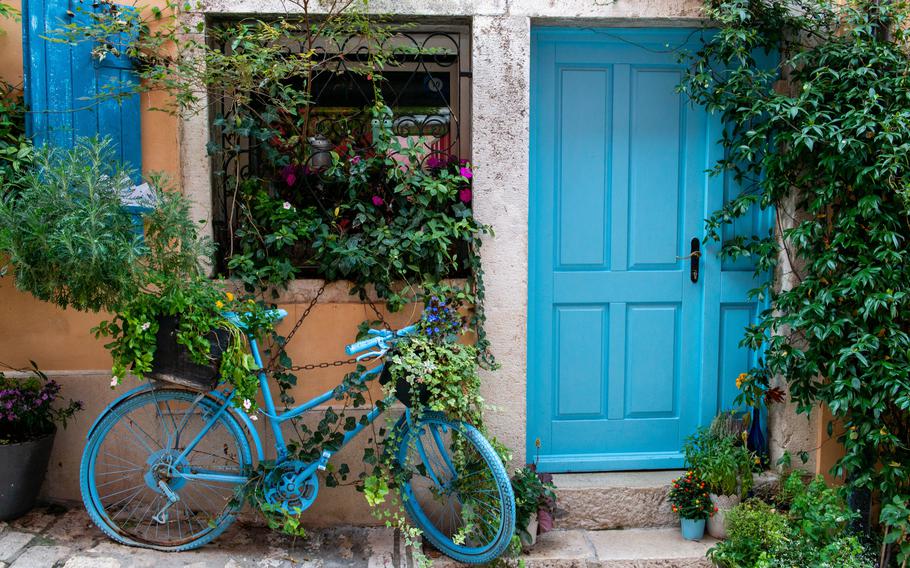 A colorful door in the old town of Rovinj. (Anna Mazurek / The Washington Post)

IF YOU ARE GOING TO

A local restaurant in the center of Motovun with a large patio that serves a variety of dishes inspired by pasta, meat and truffle. The owner grew up about 65 feet down the street and uses his grandmother’s recipes. Open every day from noon to 3 p.m. and from 6 p.m. to 10 p.m. closed on Tuesdays. Appetizers around $ 12 to $ 26.

La Puntulina is a Michelin-rated waterfront restaurant. The terrace, which stretches over the rocks, is a popular spot for sunset. Reservations are recommended. Open every day from 1 p.m. to midnight; closed on Wednesdays. About $ 17 to about $ 39.

Located in the small village of Ipsi and surrounded by olive groves, this family-run estate produces both wine and olive oil. Open every day from 11 a.m. to 4 p.m. in winter and from 10 a.m. to 6 p.m. in summer. Free tastings.