Late last week, China deployed its largest floating wind turbine in a project designed to advance technology and demonstrate floating wind power generation capabilities. According to CSSC and state media reports, the giant construction was uniquely designed for high seas and harsh conditions, including the ability to withstand a typhoon once in 100 years.

Known as Fuyao, the floating platform was towed from Maoming in southern China to a position more than seven miles out to sea in the South China Sea. The location was chosen for the demonstration due to a complex seabed and water depths between 170 feet and 225 feet. At this location, it will also be subject to strong currents and the area is prone to typhoons.

Because this is the first offshore wind turbine deployed in China, CSSC and its subsidiary Haizhung Wind, which oversees the project, have adopted a column-stabilized platform configuration, with a triangular base, a swell, a lower floating body and an upper square strut. Engineers explained that this shape with a flat lower floating body helps with buoyancy while allowing for additional mass and damping with structural support between the columns to reduce the amount of floating body engineering.

The system also uses a three-point catenary mooring system. The mooring cable takes the form of an anchor chain, which they claim provides both long life and lower costs.


The Fuyao floating platform has a total length of 236 feet, a depth of 108 feet and a width of 262 feet. It is equipped with a 6.2 MW anti-typhoon type wind turbine developed by China Ocean Construction. The height of the tower is over 250 feet. The total weight of the floating body and the assembly exceeds 4,000 tons.

The turbine uses three blades, each of which is just over 240 feet long. It uses upwind steering, variable pitch speed and a three-stage gearbox. CSSC said the design was developed to provide high power output and high reliability. 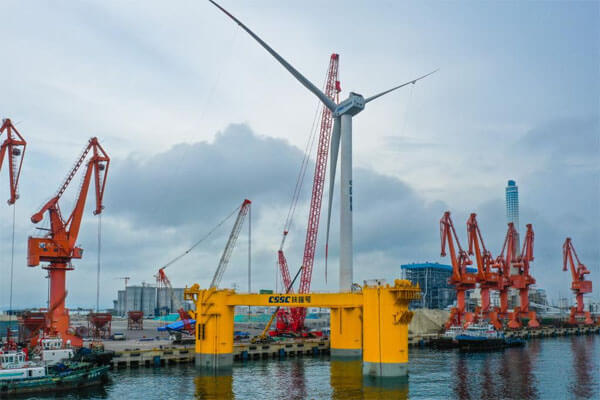 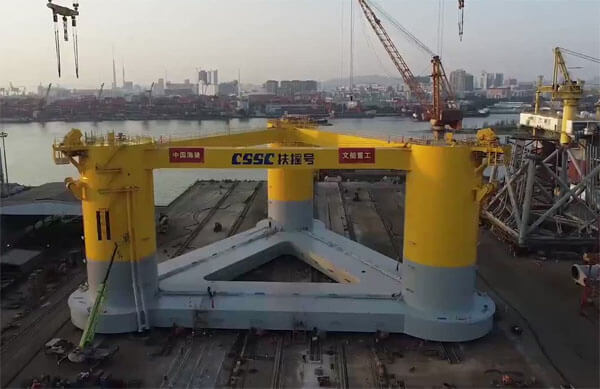 Massive base to support the 6.2 MW wind turbine