Warning: This article contains explicit accounts of racist violence and insults that some readers may find disturbing.

Four weeks have passed since Charity Oriakhu suddenly became a widow. Yet she remains silent whenever her children – a son and a daughter ⁠ – ask where their father is.

“My son asks me, ‘Where’s dad?’ thinking her dad is in hospital,” the Nigerian, who lives in Italy, told DW.

Children often stare at the door as they wait for their father, Alika Ogochukwu, to come home.

Since July 29, 2022, the two kids have been wondering why there are no ice creams and other treats.

According to sources who spoke to DW, Ogochukwu had finished his day’s work that fateful Friday and was waiting for his bus at the same bus stop in Civitanova Marche, central Italy – to return home. Ogochukwu was a street vendor.

Then, an Italian girl accompanied by a white man passed by, and Ogochukwu greeted her, saying, “Ciao bella”, an informal Italian expression meaning “hello or goodbye my beautiful”.

Oriakhu also confirmed this. “People who were there said my husband said ciao – he said hello to the boy’s girlfriend: ciao bella – just like that. Over.”

But in a fit of rage, the 32-year-old Italian launched a physical attack on Ogochukwu as he saw he was living with a disability.

He was living with a disability after being hit by a car and losing his job.

Aided by his crutch, Ogochukwu tried to run, but the Italian overpowered him, snatched his crutch and used it to kick him.

He pushed the visibly shaken Nigerian to the ground, unleashing torrents of blows before strangling him with his bare hands.

The assailant then used his knee to smash Ogochukwu’s head to the ground before fleeing the scene after stealing his phone.

This all happened in broad daylight as passers-by used their phones to record what happened.

A simple and calm man

People who knew Ogochukwu described him as a simple, calm, happy, easy-going man who believed that all humans were one.

He loved and respected everyone he met, so he greeted and complimented people effortlessly.

“He wasn’t even telling the Italian woman to buy anything. Instead, he waved,” Oriakhu pointed out.

“It is unfortunately a familiar story,” said Ojeaku Nwabuzo, director of policy, advocacy and network development at the European Network Against Racism.

“This is due to a long history of racist violence in Italy,” the anti-racism campaigner told DW. She said she couldn’t understand why onlookers couldn’t help.

Nwabuzo said Italy has a notoriety for racism across the board, noting that political and law enforcement institutions are not addressing the problem comprehensively. 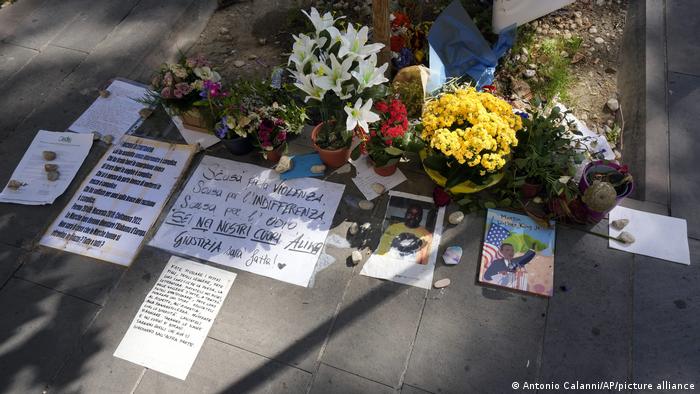 Does black life matter in Italy?

At the center of Ogochukwu’s murder is a disregard for African lives, said Kudus Adebayo, a fellow at the African Center for Migration and Society at the University of the Witwatersrand in South Africa.

“Africans have been presented over the years as a burden to European happiness,” Adebayo told DW.

“Not just by the media, but also by politicians who rely on populist ideologies to seek votes and, in order to do so, brand certain bodies as disposable.”

He said this explained the blatant disregard for black lives and the killing in public view of a vulnerable individual.

“Not just someone who has disability issues, but also a black man who is on the street trying to make ends meet.” 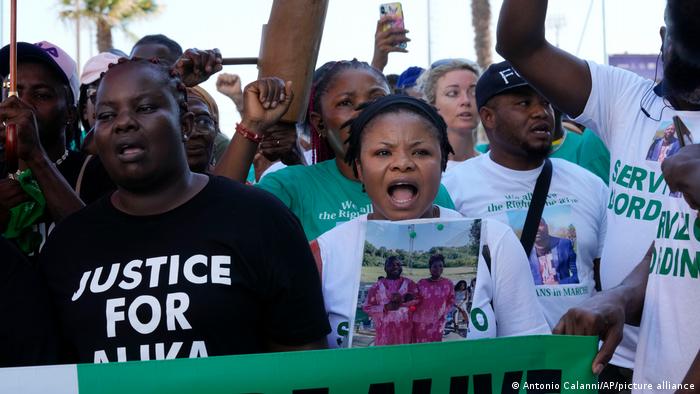 Those interviewed for this article said that many Italians believed that African immigrants were a burden on the country, brought disease and were responsible for the increase in crime.

Right-wingers have taken this narrative and made it an immigration issue.

Africans in central and southern Italy who DW spoke to on condition of anonymity for fear of reprisals said the country had a problem with hate crime, but it was never acknowledged.

They said political rhetoric at the highest level fuels violence leading to attacks like in Civitanova and other parts of the country.

A number of Africans told DW Italy was a hotbed of institutional racism.

“This issue occupies a very notorious and uncomfortable position in this particular country,” Adebayo said.

He went on to say that it is easy for people with random ideas to come out feeling they have the support of the state, “to punish” people who they believe are not should not be in their country.

“That’s the pattern in Italy and there doesn’t seem to be a very proactive approach to dealing with this very decisively.” 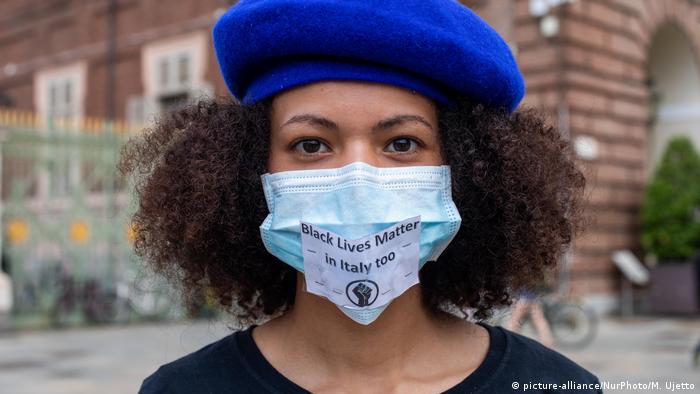 Blacks in Italy say they feel unwanted and unwelcome

Justin, a 45-year-old Nigerian car expert in Civitanova, said racial slurs are sometimes thrown directly in the faces of black Africans. At other times, racist actions are insulting.

“Racism keeps us from competing on equal terms, from learning the language, from being who we are,” he told DW.

“We are repressed in different ways, we can’t even go to school, we are just mistreated,” he added.

“They [Italian racists] give you this feeling everywhere that you are nothing. So you have a lot of fights and we are psychologically damaged and suppressed.”

“We don’t have the same rights here,” Edewor said, recalling some ugly personal experiences. “Someone once said to me, ‘you’re an old monkey, get out of here, you’re too dark’.” 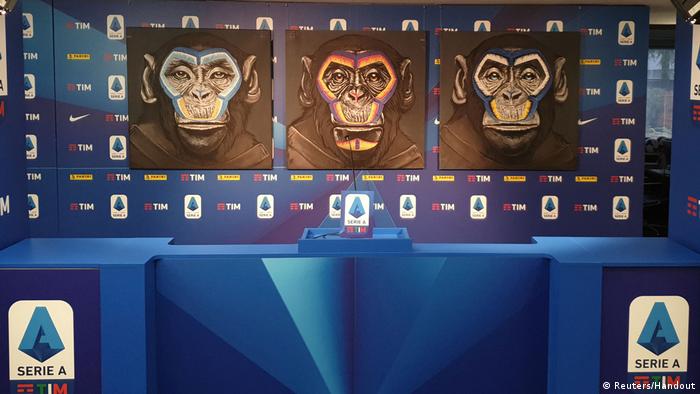 He didn’t stop there. “They call you monkey, they insult you and, they ask you what you are doing here, we don’t need you here, you can’t do anything [about the racist attacks].”

So he ignored them because he wanted to acquire his [car mechanic] certificate. “I want to succeed, so I focused on myself.”

Edewor said he understands the racist attacks: “They want to drag me down with all these words and some of these people sometimes come and apologize because they see that I am really strong, even stronger than them. .”

Kennedy, 47, who works as a delivery boy and has lived in Parma – a city in northern Italy – for 20 years, describes some Italians as pretentious people with plastic smiles on their faces but hearts full of venom.

“I had a situation where I delivered electronic devices to a client and she even offered me coffee, I accepted. When I left she called the office that next time they won’t shouldn’t send a black man to her house anymore.” 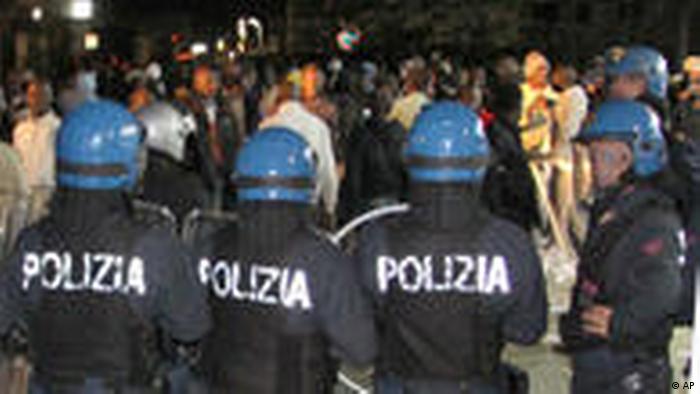 It wasn’t the only experience. “When I brought something home to deliver, she [another white Italian client] refused to open the door. She called the office to tell them that she didn’t expect a black man to bring her things.” The company told her that if she didn’t want to receive the package from a black man, she had the right to reject the article, which she then did..

Omonigho, another Nigerian in Italy, told DW she had suffered racist actions for most of her young life.

When she was two months old, her father, an engineer, and her mother, an African food store owner, took her to daycare in Cremona, northern Italy.

When the dad sometimes came by to check on his baby, “they were tending to other kids, maybe holding them. My daughter was alone on the bed in a hallway,” the dad told DW. “Which is not meant to be, but we have no alternative,” he added. “Nobody wants to carry a black child.”

Omonigho has always felt unwelcome and unaccepted despite being born in Cremona, Italy.

While non-African children who pooped on themselves in kindergarten were taken to the school cleaner to be cleaned and taught how to use the toilet, Omonigho was always told to go alone while the cleaners refused. to bathe or teach him to use a potty. .