Son of a wool merchant, Donato di Niccolo di Betto Bardi was born around 1386 in Florence, Italy, and began his career at age 17 as a goldsmith’s assistant.

Better known by his unique nickname Donatello (short for Donato), he is today considered one of the founding fathers of the Italian Renaissance.

The Florentine sculptor revolutionized the art of his time by using various materials for his work. During his career, which stretched from 1403 to 1466, he worked not only in marble and bronze, but also in terracotta and stucco, materials which had been little used since antiquity but which experienced a resurgence in popularity in Renaissance.

Donatello was known for greater naturalism in his sculptures

In his expert hands, they were transformed into some of the most beautiful and incredible masterpieces that not only testify to Donatello’s extraordinary levels of productivity and imagination, but also constitute some of the major milestones of Italian Renaissance art.

After its opening in Florence, the traveling exhibition “Donatello: Inventor of the Renaissance”is now on display at the Gemäldegalerie in Berlin. It features 90 works, many of which are important pieces of his oeuvre that have never been exhibited together.

The exhibition is the first in Germany to focus exclusively on Donatello and is the result of a unique collaboration between the Staatliche Museen zu Berlin, the Victoria & Albert Museum in London and the Fondazione Palazzo Strozzi and Musei del Bargello in Florence.

This collaborative project between the various European and British museums also enabled the exhibition to show some of the sculptor’s major works for the first time outside Italy. 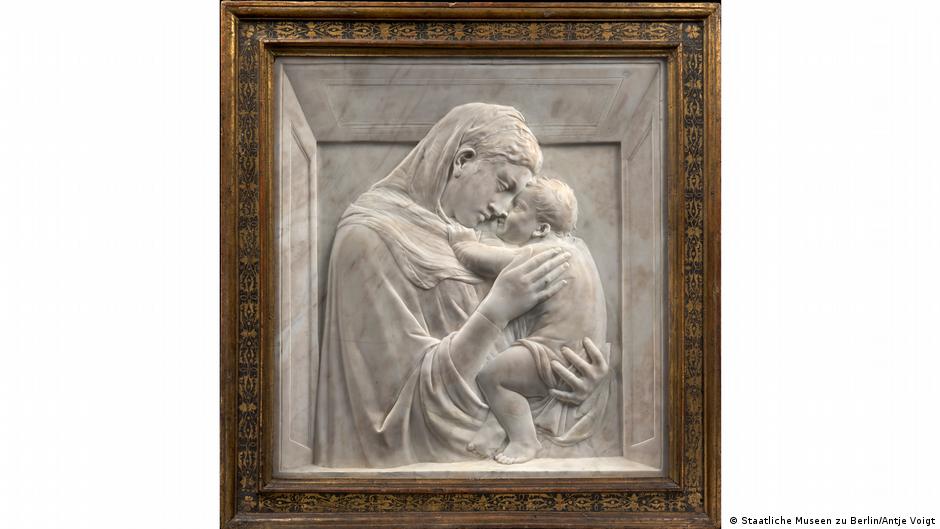 The ‘Pazzi Madonna’ is one of Donatello’s most famous works

This includes works on loan from the Basilica of Saint Anthony in Padua, northern Italy. It was here, in the 1440s, that Donatello created a series of unique bronzes that still adorn the basilica’s main altar.

The biblical character of David who slew the giant Goliath was a favorite subject of Renaissance masters.

A notable masterpiece by Donatello that first left Italy is his marble statue of “David” from the Museo Nazionale del Bargello, which was his first masterpiece.

Donatello later created a second “David” in bronze, a work that went down in history as the first male nude bronze of the Renaissance. The work was also unique in not having been designed within a specific architectural framework. This second David was commissioned by his wealthy patron, Cosimo de’ Medici of the powerful House of Medici who ruled Florence at the height of the Renaissance and commissioned almost all of the breathtaking art and architecture of the town. 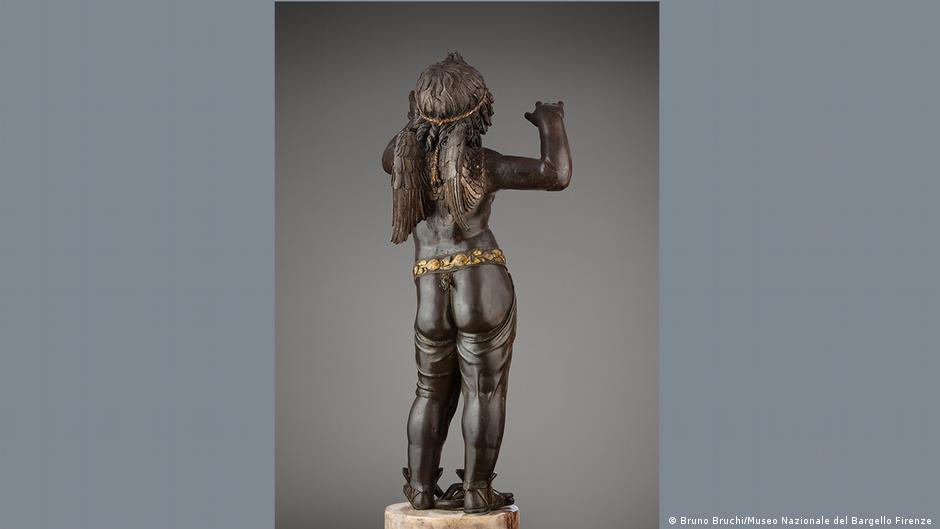 Made of bronze and measuring 104 centimeters (41 inches), the “Amor Atys” has been described as perhaps Donatello’s “most enigmatic and heaviest work”. According to historyofart.org, “this is mainly due to the fact that so little is known about how it came into existence”. This faithful statue in the form of a laughing young man would have been sculpted around 1440.

The exhibition also features sections of the frieze he worked on for the pulpit on the exterior facade of Prato Cathedral located in Tuscany, central Italy. Viewers can get close to the “Dancing and Playing Cherubs”, which was also a favorite design motif in ancient Rome and had long fascinated the artist.

From the 1420s, Donatello often incorporated these figures known as “spiritelli” or “little spirits” – even for church commissions despite their frantic dancing reminiscent of pagan processions of old. 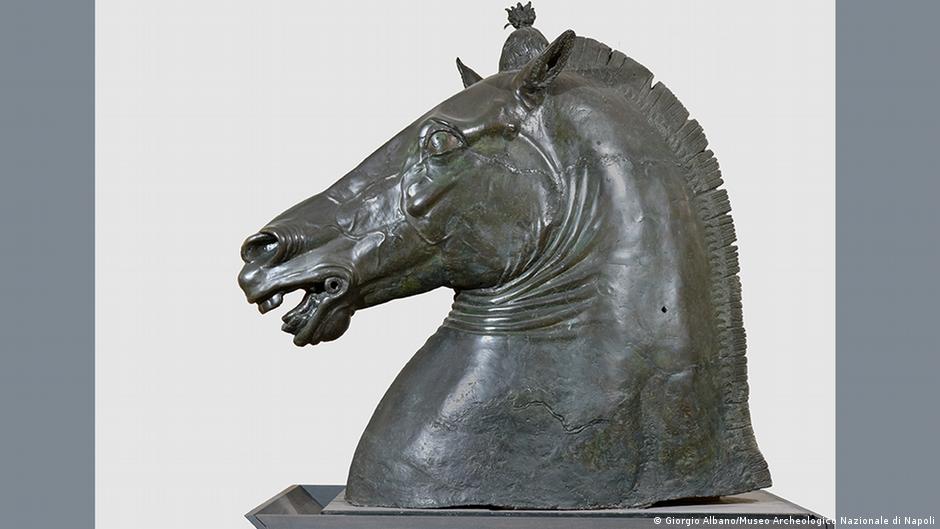 Attention to detail: ‘Protome Carafa’ is a bronze sculpture of a horse’s head by Donatello

Another centerpiece of the exhibition is the “Madonna Pazzi”, named after the Pazzi family of Florence, who are said to have commissioned it for their private devotions. Dating from around 1425-1430, it is hailed as one of Donatello’s greatest masterpieces and is an icon of early Renaissance sculpture.

It is unique because the Madonna and Child are depicted without halos and breaking with tradition, not staring at the viewer but rather staring at each other intensely – emphasizing the humanity of the work.

Donatello worked for more than 60 years on numerous commissions, public and private, in his native Florence as well as in other Italian cities such as Padua and Naples. 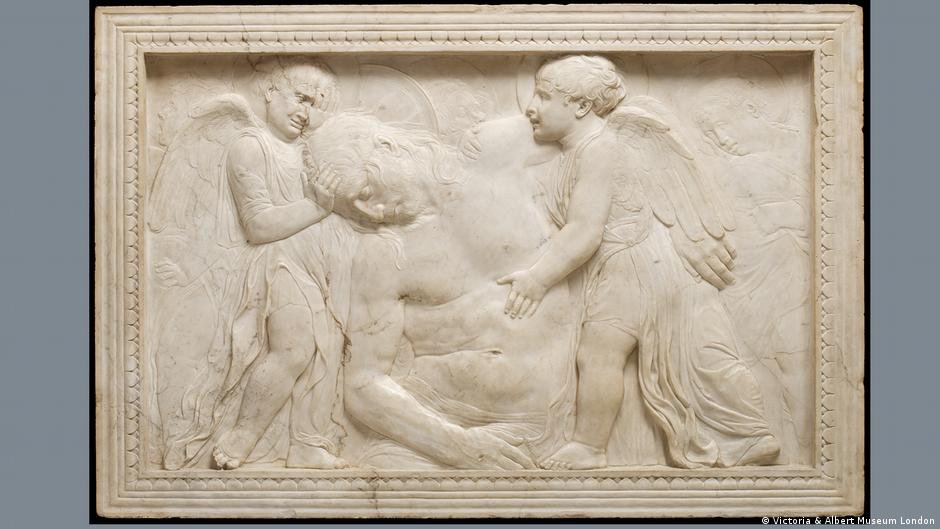 Also featured in the exhibition, “The Dead Christ Attended by Angels” is part of the collection of the Victoria & Albert Museum in London

“Donatello: Inventor of the Renaissance” is presented from September 2, 2022 to January 8, 2023 at the Gemäldegalerie in Berlin, then will go to the Victoria & Albert Museum in London.