Dutch police put an end to an illegal New Year’s rave in the town of Rijswijk on Saturday.

The party, which was held on Friday in the building of a former brickyard, brought together hundreds of people.

Rijswijk is a town in the municipality of Buren, which is part of the province of Gelderland, in the east of the Netherlands.

â€œThe rules apply to everyone! “

As quoted by the Twitter account of the municipality of Buren, the mayor of Buren, Josan Meijers, said that “it is an illegal party, therefore it is prohibited”.

“Plus, it’s not appropriate during the coronavirus crisis. The rules apply to everyone!” she added.

The ANP also reported three arrests and the confiscation of 12 vehicles.

Among the participants were people from Germany, Belgium, France, Italy and Spain.

The police were called by the residents around midnight. They arrived with several buses but did not intervene at first.

Eventually, dozens of police entered the brickyard and hundreds more were mobilized to drive people away, according to Dutch television station NOS.

According to the ANP news agency, most of the participants left voluntarily after the police intervention around noon local time (11:00 GMT).

A local prefectural source quoted by the AFP news agency said police were conducting drug tests after securing the site.

What is the situation with the coronavirus in the Netherlands?

The Netherlands is under a difficult lockdown due to the spread of the highly transmissible omicron variant of the coronavirus. This confinement should last at least until mid-January.

Only two individuals from different households can assemble outside, with the exception of burials. 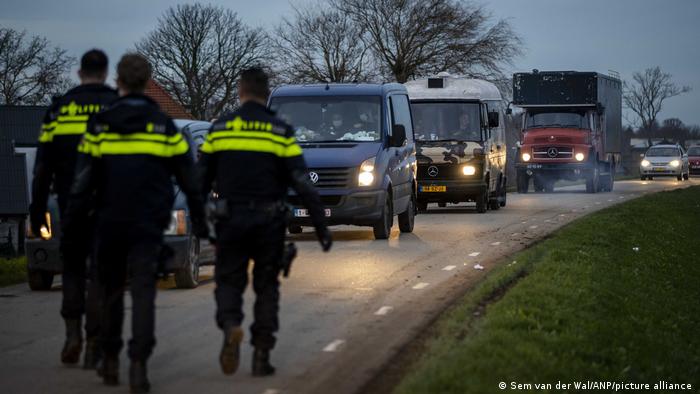 In the Netherlands, fireworks have been banned during the holiday period, a measure designed to prevent fireworks-related injuries and free up hospital beds for COVID-19 patients. Nonetheless, a 12-year-old child was killed and another seriously injured in a firecracker incident that occurred during New Year’s Eve celebrations.