The family of a seven-year-old British boy fought to save him when he suffered an allergic reaction after eating pasta while on vacation in Italy, despite assurances from restaurant staff it contained no dairy product, according to survey

By James Bayley For Mailonline

The parents of a British schoolboy who died of an allergic reaction after eating pasta during a mid-term vacation in Italy have fought to save their son’s life, an investigation has found.

Seven-year-old Cameron Wahid suffered severe anaphylactic shock after eating a dish of milk-based pasta at a restaurant in Ravello on the Amalfi Coast.

Her parents, Cassandra and Rizwan Wahid, both 43, warned staff that Cameron couldn’t have cheese or dairy but restaurant staff reassured the family that the dish did not contain any dairy products.

After finishing their meal, the family returned to their tour bus.

It was there that Cameron collapsed and went into shock in front of his parents and younger brother Aidan – before suffering cardiac arrest in the main square.

Seven-year-old Cameron Wahid (pictured) suffered severe anaphylactic shock while eating spaghetti pudding at a restaurant in the town of Ravello on the Amalfi Coast, where he was spending a semester with his family in 2015

Ms Wahid, who works as a nurse, managed to give her son an EpiPen, but it was too late.

Mr. Wahid administered CPR to his son before a visiting doctor stepped in to help him.

The schoolboy, from Grinstead, Sussex, died three days later, on October 30, 2015, in a hospital about 35 miles from Naples.

At an inquest in Horsham, Assistant Coroner Lisa Milner ruled that Cameron had died as a result of consuming milk or a dairy product.

She said: â€œI have no doubts that Cameron died on October 30 of hypoxic brain injury and cardiac arrest after consuming milk or a milk derivative.

â€œBefore ordering, the family had informed the restaurant of her severe allergy, but the meal contained milk or a derivative that caused the brain damage and anaphylactic shock that resulted in her death,â€ the coroner said. 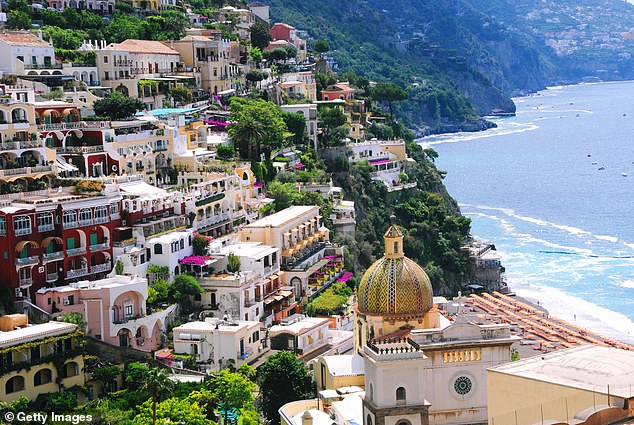 Her parents Cassandra and Rizwan Wahid, both 43, have warned staff at the Ravello restaurant (file image, pictured) that Cameron cannot have cheese or dairy.

Coroner Officer Mel Doyle told the inquest that Cassandra and Rizwan were aware of the severity of their son’s allergies and had informed restaurant staff.

â€œHer parents spoke to the staff about Cameron’s dairy allergy and were reassured that there was nothing in their food that could affect her,â€ Ms. Doyle said.

â€œThe staff spoke English and understood what the family was saying to them.

â€œCameron ate about four bites of homemade pasta with tomato sauce, then said he didn’t like the taste. After ten minutes, he started complaining that he was not feeling well.

The family was on a two week vacation in Sorrento when they took a trip and stopped at Scala restaurant on the Amalfi Coast.

Italian authorities have charged the restaurant manager, chef and waiter after Cameron’s death.

The manager died before the case could be brought, the boss was cleared and the two-year suspended sentence for the waiter was reduced to 12 months on appeal.

Mr Wahid said earlier this year: “Watching him go into anaphylactic shock and suffer like that was without a doubt the worst experience of our life.”

“He was a lovely little boy and always brightened our days.”