Archaeologists in Italy have been “impressed” by their discovery of a hydraulic system under a luxurious Roman villa which was covered during the eruption of Vesuvius in AD 79. However, they were “shocked” when they realized it hadn’t moved in nearly 2,000 years.

Scientists have recently discovered an ancient Roman water system or hypocaust, which provided heated water and air in a luxurious Roman villa in the German town of Kempten. Another team of archaeologists working in Italy has just announced the discovery of a Roman hydraulic system in Stabiaean ancient city about 4.5 kilometers (2.79 miles) southwest of Pompeii.

Scenography by Alessandro Sanquirico depicting the eruption of Vesuvius, the culminating scene of Giovanni Pacini’s opera. The explosion of Vesuvius has allowed archaeologists to rediscover how the Romans lived almost 2,000 years ago, including their ancient water systems, as enabled by this most recent discovery. ( Public domain )

Roman chronicler Pliny the Elder noted that several miles of huge luxury coastal villas lined the promontory of Stabiae. Heritage Daily points out that elite Roman personalities such as Julius Caesar , the emperors Augustus and Tiberius, and the statesman-philosopher Cicero “all owned properties in Stabiae”. But with Herculaneum and PompeiiStabiae was also buried by the October 79 AD eruption of Mount Vesuvius .

Given the upper-class nature of Stabiae, it is perhaps unsurprising that archaeologists have discovered a luxury water distribution system . But what the researchers didn’t expect was to find the device sitting still since it was last used on that fateful day in 79 AD. When Mount Vesuvius blew, it spewed superheated gases and tephra 33 kilometers (21 miles) into the sky before it rained molten rock, pumice and hot ash on the residences of Stabiae.

Along with 16,000 others, the aforementioned people Pliny the Elder died in Stabiae while attempting to rescue a friend and family by boat during the eruption. And when you consider the upheaval caused by this volcanic event, and the subsequent seismic activity, it is perhaps clearer to see why it is so unusual for this water system to remain undisturbed, in situ, after all this time. 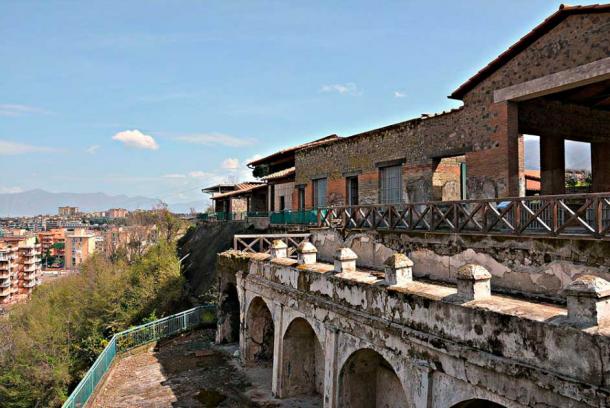 Exterior of an excavated part of the Villa Arianna at Stabiae. Villa Arianna was named after a large mythological fresco on the wall of the triclinium. (Mentnafunangann / CC BY-SA 4.0 )

An “extraordinary” discovery: a water network discovered in Stabiae

The research team was excavating a small colonnaded garden (peristyle) at Villa Arianna when they discovered the water tank and a decorated lead tank. According Sites of Pompeiithe Villa Arianna complex was built in the 2nd century BC and occupies approximately 2,500 square meters (26,9097.76 sq ft).

The villa was first excavated by Swiss engineer Karl Weber between 1757 and 1762, when most of the artifacts, furniture and frescoes were moved to the Bourbon Museum in Royal Palace of Portici .

Sites of Pompeii explains that this villa displays “the extremely refined taste” of its high-ranking and demanding owners. The villa is famous for its mythological arts, for example, the small salons feature “flying figures, cupids, mythological characters, miniature landscapes, masks and medallions containing busts”.

While the discovery of water reservoir in its original position is perhaps not as splendid as the features listed above, the new director of the Archaeological Park of Pompeii says it represents “an extraordinary find for the Vesuvius region”. 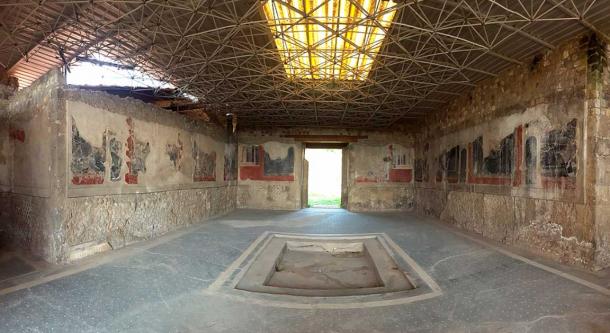 The Villa Arianna impluvium in Stabiae was part of the complex Roman hydraulic system. The impluvium was a water catchment basin system to collect rainwater from the roof. (Roberto.imposti / CC BY-SA 4.0 )

Cartography of ancient Roman waterways in a Villa Stabiae

In 2021, Deutsche Welle reported that Dario Franceschini, the former Italian Minister of Culture, had appointed Gabriel Zuchtriegel as the new director of the Pompeii Archaeological Park. Zuchtriegel explained that a water tank like this, with two stop buttons, “seems almost modern…and they’ve always amazed people since the first discoveries at Stabiae, Pompeii and Oplontis.

Since the water system was found in situ, archaeologists were able to see exactly how it distributed water to the different rooms of the villa. Two pipelines have been identified: one supplying the villa’s thermal power station and the other most likely supplying catchment area (main water tank) in the atrium.

Additionally, two stop buttons allowed users to control the flow of water and stop it completely when maintenance was needed. This water system also features a “raised astragal” which is representative of the particular workshop that produced it. In conclusion, Zuchtriegel said the water system is an example of “how accessibility, knowledge and protection are integrated” in the Roman world.

Top image: Archaeologists unearthed the remains of a Roman hydraulic system at Stabiae, near Pompeii. Source: Sites of Pompeii