Amid a picture-perfect fall day, Mayor Nancy R. Rossi and the West Haven Italian Heritage Committee honored Vinci, the grandson of immigrant grandparents from the family’s namesake town, Vinci , in the region of Tuscany, Italy, during a noon ceremony on the steps. of the town hall.

The award is given annually to an Italian resident or couple who personifies volunteerism in the city’s close-knit Italian-American community.

As the sound of Italian music filled the air during the 20-minute cultural event, Vinci hailed his Italian lineage with friends, former and current football colleagues and loved ones, including his wife, Joanne , and son, Chris, daughter-in-law, Colleen, and grandson, Christian, 13, of Fairfield.

Along with descendants of people from the old country, Vinci was also joined by his sister-in-law, Judy Marks, of North Haven, and an array of state, city and business leaders, including Democratic Senator James J. Maroney, City Clerk Patricia C. Horvath and Simon McDonald, Director of Memberships and Marketing, Milford Regional Chamber of Commerce.

Vinci told the crowd, some wearing red, white and green, that he appreciated the recognition and thanked the many players, coaches, referees and league officials he mentored throughout his 38 years of service – and more – to West Haven Youth Soccer.

“My grandparents would be proud – I know they’re smiling,” said Vinci, who lives with his wife of 37 years on Ocean Avenue near Lake Street Beach in West Shore. “The best day of the year is the first day of the (football) season. I want to thank everyone!”

Rossi read a quote from the mayor praising Da Vinci’s civic contributions, saying, “As a second-generation Italian resident of our city, I hope you reflect with pride on the countless lives you have inspired on and outside the ground. I admire your dedication to shaping the principles of West Haven Youth Soccer – fair play, accountability, teamwork – and upholding the values ​​that make our city, state and country great.

Rossi then presented Vinci with an embroidered “Italian-American of the Year” jacket.

The ceremony included remarks from his executive assistant, Louis P. Esposito Jr., the master of ceremonies. It also included a blessing from vertical church pastor Frank Aprea, the singing of “The Star-Spangled Banner” by Ana Garcia, and the playing of the Italian national anthem, “II Canto degli Italiani.”

An Italian-flavored lunch after the event was prepared by Lorenzo’s Restaurant of West Haven in Fellowship Hall at First Congregational Church at 464 Campbell Ave., across from City Hall on the green. Two cakes were provided by Costco of Milford.

Since 1984, Vinci has given back to the community through football, as a coach, referee and league official.

Above all, he enjoyed coaching his son’s teams, joking, “Chris is gone, and I haven’t.”

After the resignation of longtime league president Paul Duffy, Vinci, then vice-president, took over as president in 2001.

Since then, Vinci has made the football league “the largest sports league for young boys and girls in Connecticut.”

His support for all things West Haven Youth Soccer, established in 1978, is so revered that the league named the field at Pagels Elementary School after Vinci.

His dedication to the league is complemented by his service to the community he calls home, a life’s work that includes raising awareness and raising money for West Haven’s Breast Cancer Awareness program.

Each year, in recognition of National Breast Cancer Awareness Month, the league hosts a tournament on Columbus Day weekend at the Paul Duffy Football Complex next to Bailey Middle School. This year’s tournament, a field of 50 teams from across the state, kicks off Saturday and Sunday, Oct. 8-9.

According to Vinci, the players wear pink uniforms and use pink balls. The league is even painting pink lines on the field instead of the usual white to raise breast cancer awareness.

Best of all, a portion of tournament proceeds and raffles, along with a fundraiser of breast cancer ribbon stickers, benefit the city’s breast cancer program, with more than $20,000 raised so far, Vinci said.

Da Vinci’s paternal grandparents left their home in central Italy and came to America for a better future, arriving on Ellis Island in New York in the early 1920s and settling in the town of Whitehall in upstate New York, the smallest city in the state, bordering Vermont.

In the fearless spirit of the Italians who paved the way for millions of immigrants who followed their journey to America, Vinci and his grandparents bear witness to the diversity and promise of the United States.

Vinci was born and raised in Cohoes, New York, a town in northeast Albany County. He is a graduate of the La Salle Institute, a preparatory school for the Catholic College in Troy, New York, and the University of Rochester.

Now retired, Vinci served as senior technical director in AT&T’s IT department. He also served as an IT manager at SBC Communications and the Southern New England Telephone Co. All three telecommunications companies previously operated in New Haven. 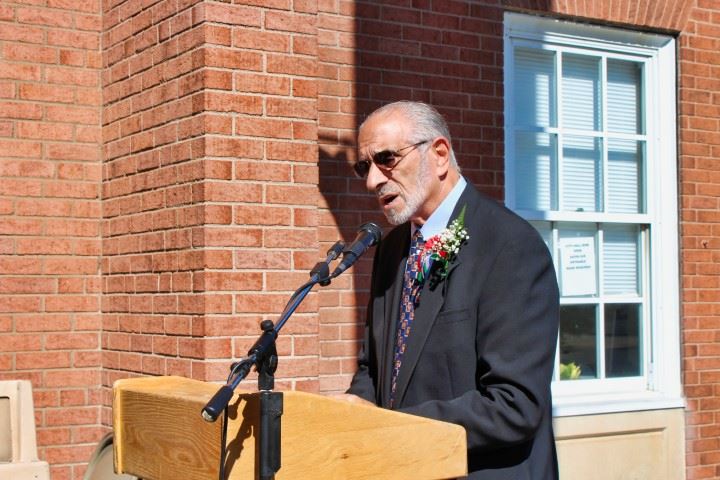 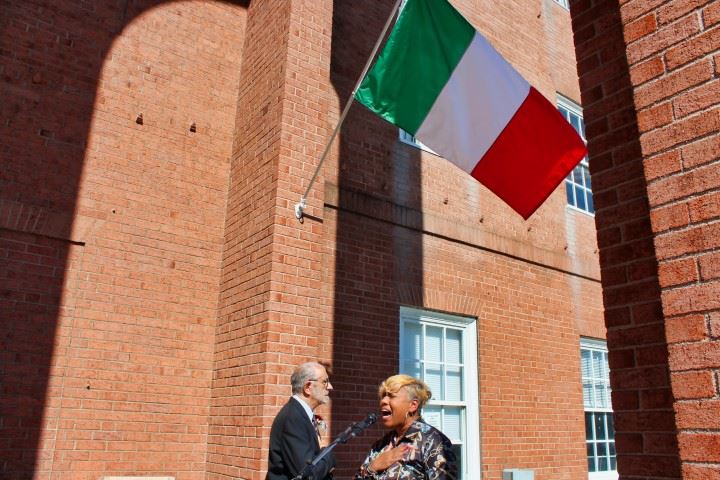 An Italian flag flutters in the wind as Ana Garcia sings “The Star-Spangled Banner.” Watching over is Esposito. (City Photo/Michael P. Walsh) 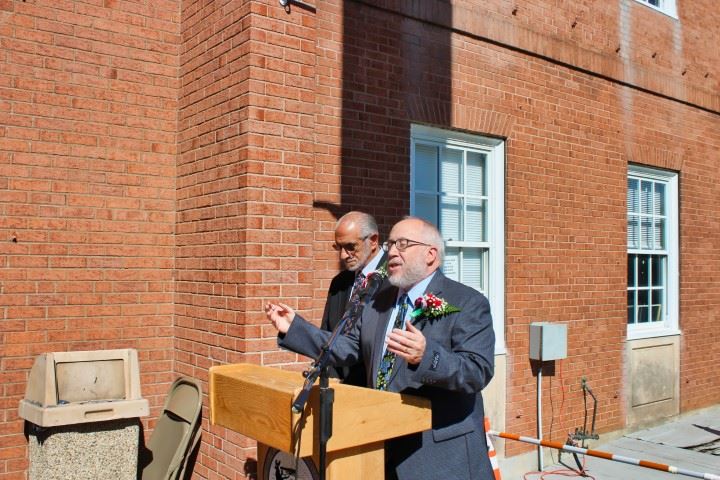 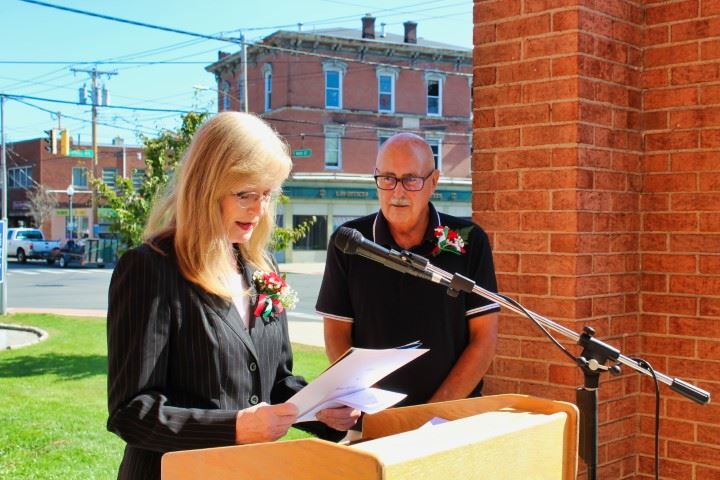 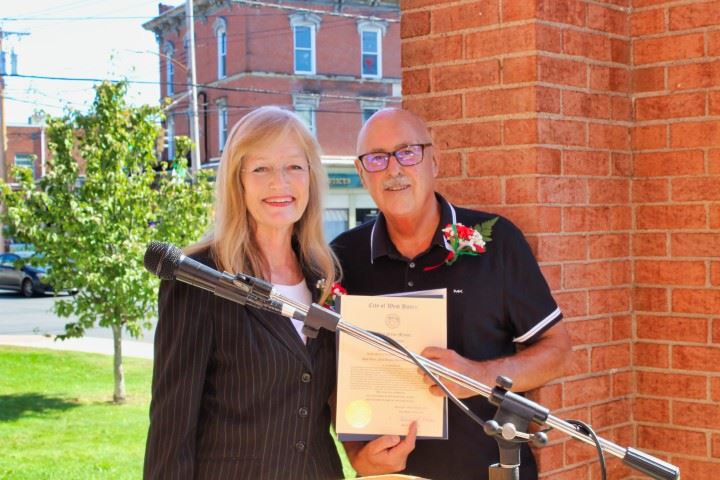 Jean Vinci receives a citation at the town hall of Rossi for his “incomparable heritage of volunteerism”. (City Photo/Michael P. Walsh) 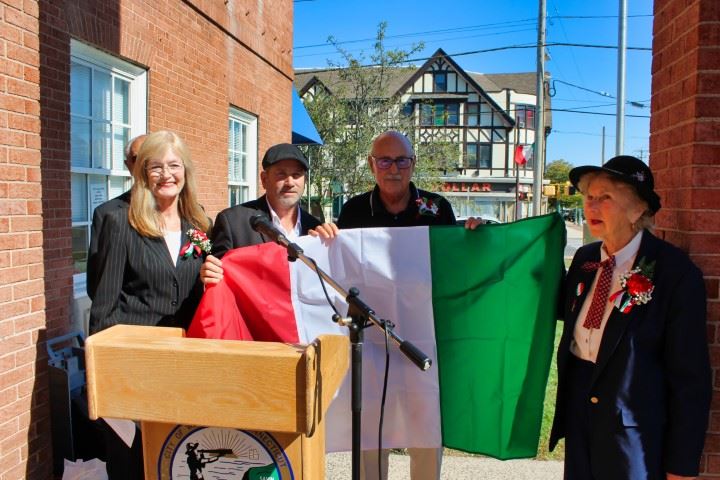 Vinci receives an Italian flag from the President of the Italian-American Civic Association of West Haven, Paul M. Frosolone, and Roberta Daniels DeFonce, former President of the Ladies Auxiliary Association, as Esposito and Rossi look on . (City Photo/Michael P. Walsh) 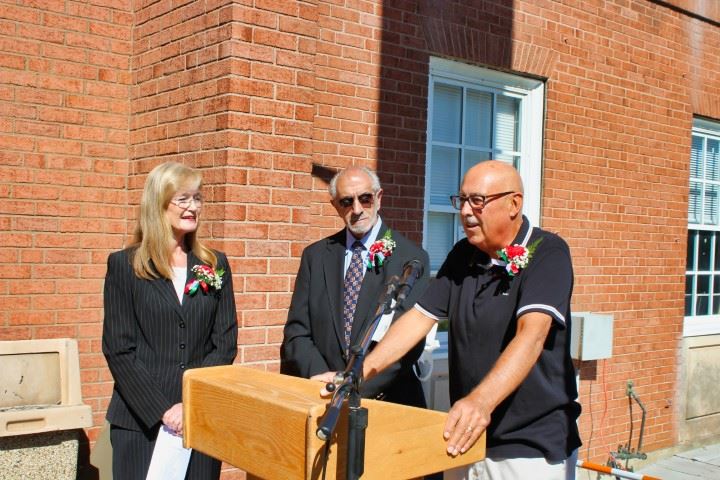 A humble Vinci thanks the many players, coaches, referees and league officials he has mentored throughout his 38 years of service – and counting – at West Haven Youth Soccer. Watching over are Rossi and Esposito. (City Photo/Michael P. Walsh) 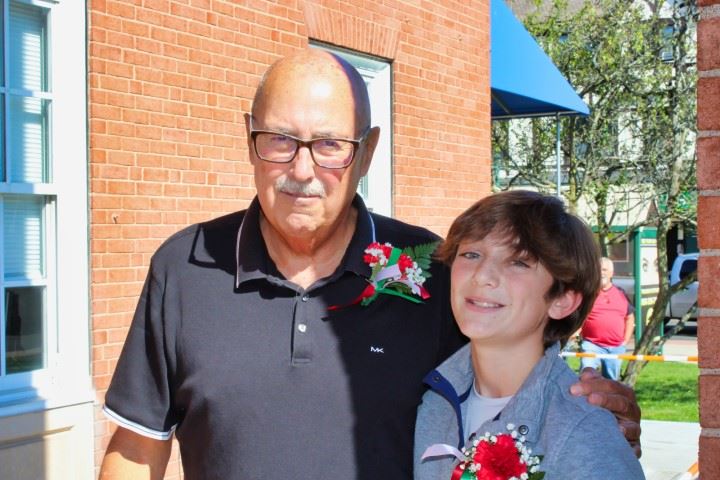 This press release was produced by the City of West Haven. The opinions expressed here are those of the author.

Get more local news straight to your inbox. Sign up for free newsletters and patch alerts.