Nestled in the mountains of Wakayama Prefecture a few hours southeast of Osaka, Japan by car is a world-famous cemetery that houses the graves of more than 200,000 Buddhist monks who are said to await the resurrection of the future Buddha. Almost 2 kilometers long, the Okunoin cemetery is the largest in Japan. It has been around since 816 AD and every inch of it is sacred. During the day, Okunoin Cemetery looks relatively normal. At night, however, Okunoin is considered a very mysterious and sometimes frightening personal experience. Here’s why.

How or who is behind the beginnings of Okunoin Cemetery?

Okunoin Cemetery is located in Koyasan, an ancient village in the Kii Mountain Range of Wakayama Prefecture, Japan. It is one of many sacred places located in this mountainous and deeply forested region that have collectively been added to the Unesco World Heritage List. Known collectively as the Sacred Sites and Pilgrimage Routes in the Kii Mountain Range. These sites include Yoshino and Omine, Koyasan, and the Shinto Kumano Kodo pilgrimage route that connected the area to Imperial Kyoto (terminating at Kumano Grand Shrine).

However, Okunoin is not a Shinto cemetery, although Shinto items can be found throughout the cemetery. The city of Koyasan is the epicenter of Shingon Buddhism. This Buddhist sect was introduced to Japan in 805 AD by the Buddhist master Kūkai, also known as Kōbō-Daishi. Kōbō-Daishi studied with the monks of Xi’an, China during the Tang Dynasty before returning to Japan where he became one of the country’s most important Buddhist religious figures.

Kukai’s legacy is one of the few living examples of Tantric Buddhism in East Asia. This Japanese Buddhist sect focuses on mikkyo, Japanese term for the Vajrayana practices of Shingon Buddhism and related practices that are also part of the Tendai and Kegon schools of Buddhism in Japan.

Kōbō-Daishi built a temple on the isolated summit of Mount Koya as a place of meditation. Little did he know that his tiny temple would expand to over a hundred temples and monasteries and would be the reason Koyasan Village started.

Kōbō-Daishi Mausoleum is located in the center of Okunoin Cemetery surrounded by tall cedars and stupas or tombstones. Here, the monks offer him ritual meals twice a day. The monks believe he is in eternal meditation here, focusing on the liberation of all beings.

The interior of the mausoleum shines with a thousand lights thanks to thousands of lanterns. According to legend, two of these lanterns have been burning since 1088 AD. One is from a former emperor and the other from a peasant woman who sold her hair for a lantern to pray for her deceased parents.

It is this mausoleum that makes the cemetery so sacred to Shingon Buddhists. Being close to their religious leader means that they will be among the first to welcome the future Buddha when he returns to Earth. They don’t necessarily have to be buried there either. A physical representation like a lock of hair is enough. 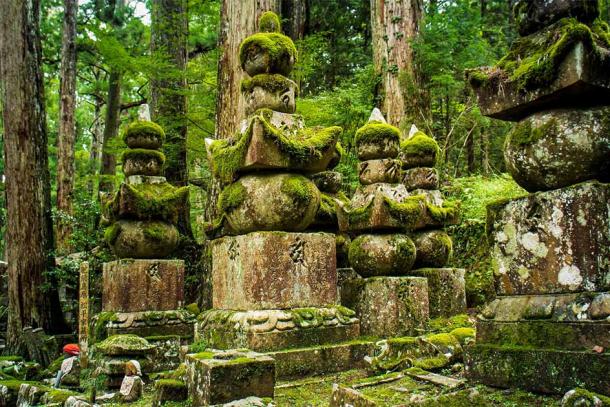 Why is Okunoin so scary at night?

What makes Okunoin Cemetery so spooky at night, however, is the Jizo Bosatsu. These are stone carved figurines that are cute by day and a bit spooky by night. These figurines represent spiritual beings who strive for the enlightenment of all creatures, not just themselves. Jizo Bosatsu are usually decorated with small red woven aprons and hats. These tell a tragic story. The small childish statues represent the Jizo Bosatsu which protects the souls of children.

Many of these small Jizo Bosatsu are surrounded by offerings of small coins, candles, coffee cans, incense, and sometimes food. Unfortunately, these offerings were made by parents in the hope that these little spirits could provide safe passage for their children to the afterlife.

This is also the reason why many people adorn them with red hats and aprons to keep the spirits warm, hoping for protection for themselves and the peaceful passage of their loved ones to the afterlife. Locals will also pray to these statues, throwing water and bowing their heads and offering respect and prayer. During the day, these figurines seem somewhat normal. At night, however, the sight of hundreds of these figurines dressed in children’s clothing in a graveyard is downright terrifying. 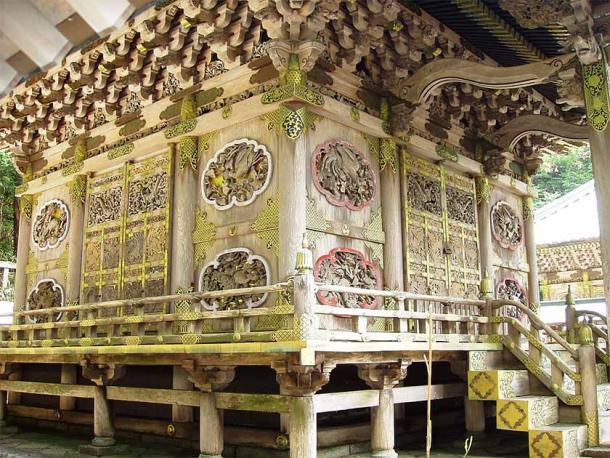 The Tokugawa Mausoleum is located within the grounds of Okunoin Cemetery and dates from the 17th century. (Daderot / CC BY-SA 3.0 )

Other monuments and tombs in Okunoin

These are not the only monuments present in the cemetery of Okunoin either. Since Shingon Buddhism values ​​all creatures, one can find monuments of different types here. Even monuments to insects have been erected by the pesticide company that exterminated them. There is also a monument dedicated to the enemies of Japan who have been killed in wars through the ages. Some Japanese companies will even maintain monuments in the cemetery for their employees as a benefit. There are other monuments depicting bizarre and unexpected things such as spaceships, cooking utensils and pyramids.

The graves at Okunoin Cemetery lie on either side of a long, mystical path that winds through tall cedars for a distance of 2 kilometers (1.24 miles). Many important people, including prominent monks and feudal lords, have been buried here over the years. In fact, there is a 17th-century Edo-era mausoleum here for the all-powerful Tokugawa shogun family, who ruled Japan from Edo (Tokyo).

The number of graves continues to increase as people are still buried at the cemetery to this day. Since every living thing is sacred in Shingon Buddhism, even pets are buried here. Followers of Shingon Buddhism also believe that there are no dead in the cemetery, only spirits awaiting the return of the Buddha.

While Okunoin Cemetery and its surroundings are still home to meditating monks in the temples, it is also an incredibly popular tourist attraction. Thousands of people flock every year to experience Okunoin and the temples scattered throughout the city of Koyasan.

Top image: At night, Okunoin Cemetery becomes an eerie experience with dim lighting, deep shadows, and the awareness of all the dead buried around you. Source: willy /Adobe Stock