Sr. Letta Mosue, left, superior general of the Sisters of St. Brigid in South Africa, and Sr. Regina Kuizon, provincial leader of the Good Shepherd Religious of the Philippines-Japan, are pictured in a 2017 photo in Manila, the Philippines. Mosue died on July 19. (GSR Photo/Gail DeGeorge)

NAIROBI, Kenya— Nuns from Africa and beyond have expressed their shock and sadness at the death of Sr. Letta Mosue, who died on July 19 near Rustenburg, a populous town in the North West Province of South Africa. Well known in various sister forums, her influence has also extended to interfaith groups and professional organizations in psychology and social services.

Mosue was the Superior General of the Congregation of St. Brigid in the Diocese of Rustenburg, South Africa. Mosue, who died at 68, joined the convent when she was 15. In her decades of service to the people, she has been an educator, clinical psychologist, and trauma counseling specialist. She has also ministered with the South African Police Corrections Service and the University of Pretoria. She has also worked in private practice and in an oncology clinic.

She had colon cancer and had traveled to Italy for a conference earlier this year and fell ill, said Johannesburg-based clinical psychologist Johanri Engelbrecht. “They then discovered the tumors, and she underwent emergency surgery and excellent medical care. After the operation, she recovered in the Vatican. She returned to South Africa in mid-June and had a few chemotherapy sessions.”

The sisters who worked and mingled with her described her as a person with a heart of gold, an independent spirit and honesty, who changed the lives of people in her community and those she met during her ministries. 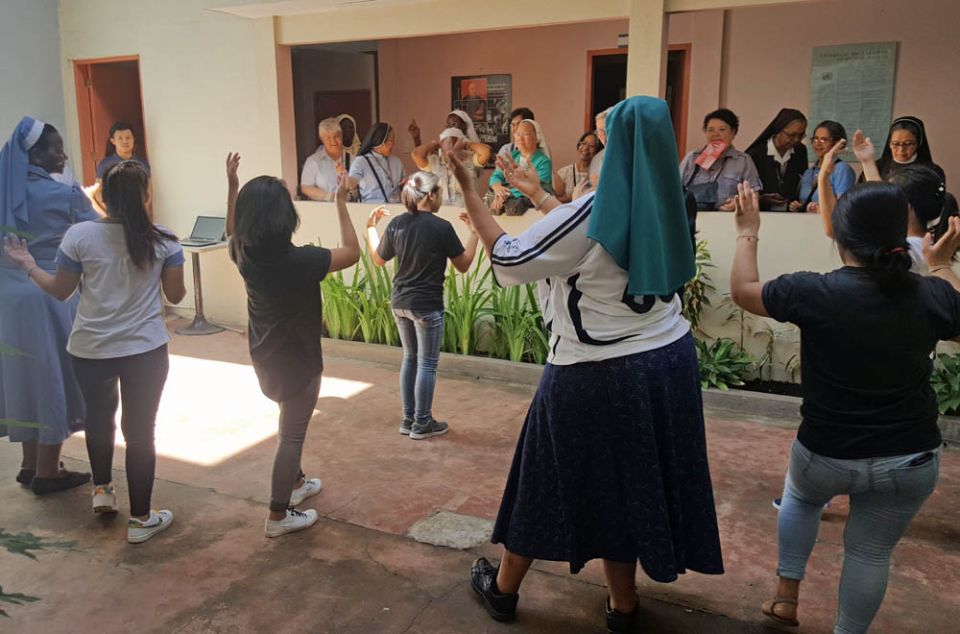 In this 2017 photo, Sr. Letta Mosue, in black skirt, Superior General of the Sisters of St. Brigid in South Africa, and Sr. Josephine Mpatane, far left, Superior General of the Sisters of Calvary in Botswana, stand join in a dance performance by young women at the Ruhama Center for Women, a residential center for young women rescued from trafficking and abuse run by the Good Shepherd Sisters in Manila. (RSG Photo/Gail DeGeorge)

“I have known her for many years. Luckily, I visited her last month after she returned from Rome. I must confess that I was shocked when I saw her lying in her sickbed. She had l looked frail but still gave me her beautiful smile,” said Sr. Boitumelo Albertina Matlhabe of the Calvary Sisters in Botswana, who is also the superintendent of St. Joseph’s College.

“She told me she would be returning to Rome in September for further medical attention. It gave me hope that she would indeed pull through.”

Matlhabe added: “She was a very strong person with an independent spirit. It was not easy to convince her of everything she did not believe in. She was a lover of Africanism and proud of her roots. Africans.”

Sister Nkhensani Shibambu, Superior General of the Companions of St. Angela in South Africa, said Mosue had a lot of energy and was involved in so many responsibilities that she wondered how Mosue handled them all.

“She was one of my best support people when I became chair of our leadership conference in South Africa,” she said. “She was always correcting me when I was wrong, especially in my leadership. She was an outspoken person who never minced her words when she was convinced of something. She was always smiling and correcting at the same time.”

Mosue was also active beyond Africa, contributing her ideas to organizations to help build connections and communication and pledged to help build a “global brotherhood”. Sr. Patricia Murray, Executive Secretary of the International Union of Superiors General, or UISG, said Mosue was a blessing to the organization under her leadership of Constellation C6 South Africa (a geographically defined group of Superiors General under the Union Superiors General), which covered South Africa, Lesotho, Namibia, Botswana and Eswatini (formerly known as Swaziland.)

“Her wisdom, her energy and her commitment to religious life were a gift that she shared widely,” said Murray, a member of the Institute of the Blessed Virgin Mary. “Pastorally, her accompaniment of so many showed the compassionate and merciful face of Christ. She will be missed as one of the strong religious women who made an impact not only in her nation but in global society.”

She was also a Global Sisters Report champion, serving as a panelist on the second year of “The Life,” a regular feature in which sisters offer their thoughts on a variety of topics concerning spirituality, religious life, and issues. social and political..

“When I close my eyes to imagine Sister Letta, I see her smiling,” said Sr. Michele Morek, a liaison sister for Global Sisters Report who oversees “The Life” feature. “I remember her writing about how her community of just 15 sisters was old and sick, but her columns that year on The Life panel were joyful – describing the ecumenical and collaborative work they were doing with d other churches and other religious congregations. She was a person who empowered others until the end of her life.”

A Mosue column for Global Sisters Report in 2020 is an example. She wrote about the gender-based violence that gripped parts of South Africa and in a statement condemning the attacks on behalf of the UISG constellation. But she did not let the negative have the last word, keeping the focus of the column on the joy of accompanying young people on an ecumenical pilgrimage to Taizé in Cape Town.

She has also been a frequent contributor to the GSR Africa:Connect WhatsApp group, helping to deepen conversations with her insights.

Sr. Charity Zulu of the Benedictine Sisters of Twasana in South Africa said Mosue, who led the general chapter of her congregation last year, was sincere and forthright. This character could be seen by anyone meeting her for the first time, she said. “Life is hard, we never thought Sr. Letta would be gone now,” she said. “We have learned to accept God’s will.”

A memorial service held on July 27 drew participants from around the world, including many from professional organizations, psychologists, as well as members of other faiths, reflecting his work in interfaith dialogue and understanding. Many have spoken of her dedication to social justice causes, the people she counseled, and the promotion of understanding between Africans and the African Diaspora, especially in the field of psychology.

Others noted her joy, her kindness, and even her love of dancing. “She was an iconic person who impacted everyone she met.” said Aggie Kalungu-Banda, who led the online memorial service and co-founder of Ubuntu Lab, a learning program for changemakers, innovators and innovators, of which Mosue was a member of the leadership team and of the faculty. “May the good Lord rest his soul in eternal peace.”