(ECNS)– To understand what the Xinjiang region means to China, one must first learn something about how the People’s Republic of China, as it is now constituted, was created during thousands of years. The history of how Xinjiang became an integral part of this nation dates back to the second century BC and the Han dynasty that ruled much of what is now modern China. The Han expanded their territory westward and by 60 BC they had consolidated control of the Tarim Basin region, including what is now officially the Xinjiang Uyghur Autonomous Region of China. This connection marked the beginning of the Silk Road trade network which extended to the Roman Empire. For historical and geopolitical reasons, China has always maintained that Xinjiang is essential to its sovereignty and national security. For 100 years, Chinese scholars have studied the nation’s ties to this region. Below is a review of the research.

Distribution of the ruins of Luntai City. (Photo courtesy of Dang Zhihao)

Where is Western Regions Border Command?

According to Han’s Book (the history of the Han dynasty), in 60 BC. BC, the Western Han Dynasty established the Western Regions Frontier Command, and the first appointed Governor-General, as we know, was ZHENG Ji. This is significant in Chinese history as it reveals the historical provenance of Xinjiang’s formal incorporation into Chinese territory. There has been no interruption of this reality even until today.

So, where is the Western Regions Frontier Command of the Han Dynasty located? Are there structures to find? If they are ruins, what is their design and extent? These questions have become the center of discussion between generations of researchers.

Han’s Book reports that the Western Regions Frontier Command of the Han Dynasty was located in a place called Wulei Town, “1,100 km from the Yangguan Pass”. The book also records the location relationship between Wulei town and Qiuci (near present-day Kuqa town, Xinjiang): “Wulei town is 140 kilometers from Qiuci town to the east, 130 kilometers from Quli to the north.” By examining current maps, it can be roughly estimated that Wulei City should be located in Luntai County, Bayinguoleng Mongolian Autonomous Prefecture, a section of present-day Xinjiang.

The evidence leads us to Luntai County, located northwest of what is now the Mongolian Autonomous Prefecture of Bayinguoleng in Xinjiang, at the southern foot of the Tianshan Mountains and the northern edge of the Tarim Basin. Recently, archaeological excavations revealed that there were more than 20 urban sites from the Han and Tang Dynasties (618 AD – 907 AD). So which of these 20 city sites contained the Western Regions Border Command during the Western Han Dynasty (202 BC – 8 AD)?

Chinese scholars have long been fascinated by their history, as have people around the world. Since the Qing Dynasty (1875 – 1908), historical geographers have conducted textual research on the location of the Western Regions Frontier Command based on the records of Han’s book. Visiting ancient sites in Xinjiang, and speculating that “present-day Kuqa Town belongs to Zetel Post and East Che’erchu Post, both located in Wulu Town” (Xu Song), it is i.e. presently the city of Qedir in the eastern part of the county of Luntai up to the region of Qarqj.

Based on the clues, many scientific research institutions across China conducted multidisciplinary research on the ancient cities of Luntai County, which further narrowed the scope of the possible location of the Western Regions Frontier Command to the city of Wulei, in the southeast of Jinluntai County.

Discover “another clue” for the Western Regions Border Command

According to the Book of Han (Part 2)around AD 16, the Western Regions Border Command moved from Wulei City to Taqian City.

The search continues in the ancient city of Yuqikat, located 22 kilometers southwest of Xinhe County, Aksu Prefecture, Xinjiang, has attracted the attention of archaeologists. In 2013, a combined archaeological team of leading Chinese scholars conducted an exploration of the ancient city. 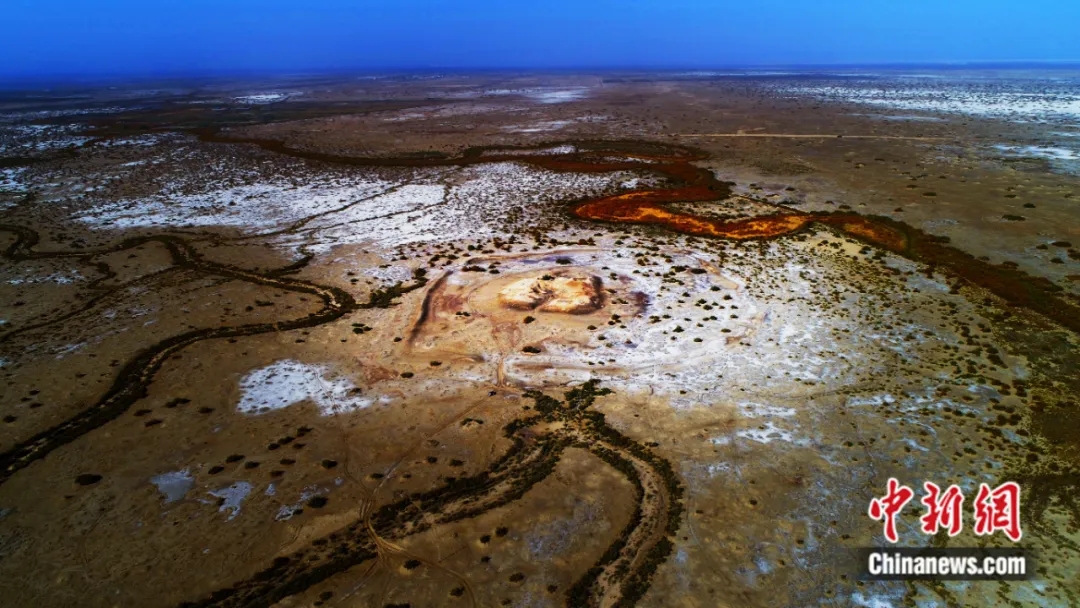 Aerial photo of the ancient city of Yuqikat. (Photo courtesy of Dang Zhihao)

As early as 1928, HUANG Wenbi, a professor at Peking University, had carried out archaeological investigations and excavations in this area. In addition to collecting a large number of Han dynasty relics, he also discovered a personal seal of LI Chong, the last governor-general of the western regions of the Western Han dynasty. In 1953, peasants discovered an “official seal” of the Han dynasty given to the leader of the Qiang (ethnic group from western China) of the region. The discovery of these seals provided important historical evidence to determine the importance of the ancient city of Yuqikat for the Han dynasty.

Examination of the ruins of the ancient site of Yuqikat reveals that there are 3 cities built on top of each other. The furthest town is 1,500 meters long from east to west. It is the largest ancient city ruins in Xinjiang. There are foundations for many high-rise buildings built in the second city. Large tracts of ruins, including homes and office buildings, have been uncovered. There is also a wide road built.

Based on the historical evidence, the scale of this ancient city and the quality of the buildings, archaeologists first deduced that it could be the important location of the city of Taqian, where was the Western Regions Frontier Command after the move from Wulei around AD 16.

After determining the existence of the Western Regions Frontier Command, which was moved to around AD 16, archaeologists focused their energy on determining the exact location in modern China. Possibly in southeastern Luntai County, where the ruins of the 5 ancient cities of Kona Xiehaier, Koyuk Shahri, Seville, Zhulkut and Chak Pailaq are found.

Since 2018, the research team of the research project “The Western Regions Frontier Command — Archeology of the Military and Political System Construction in the Western Regions of the Han Dynasty” has narrowed its archaeological excavations to two “possible locations” among the five cities. sites in the southeastern part of Luntai County: Koyuk Shahri Ancient City and Zhulkut Ancient City.

The ancient city of Koyuk Shahri lies about 20 kilometers north of Luntai County, Xinjiang. There are walls surmounted by irregularly rounded rectangles. In 1928, after Professor HUANG Wenbi investigated, he believed that it “may be the ancient site of Han Dynasty Luntou Kingdom”. In 2011, LIN Meicun, a professor at Peking University’s School of Archeology and Museology, wrote an article endorsing the view that the ancient city of Koyuk Shahri was the city of Wulei where the Western Regions Border Command.

Archaeological excavations of the ancient city of Koyuk Shahri in recent years have shown that as early as 770 BC to 550 BC there were peoples in this area and elaborate settlements were built. From 550 BC to 400 BC, with the increase in population and social development, people began to build high city walls, piling mud on the low walls to protect these settlements. From 400 BC to 150 BC (which was the beginning of the Western Han Dynasty), we find the main period of use and development, reflecting the continuous expansion and reconstruction of the city’s central buildings. After 150 BC, although still containing people, Koyuk Shahri was no longer important until it was completely abandoned in 80 AD

Zhulkut, another ancient city was the subject of extensive archaeological excavations at the same time. This city site is about 24 kilometers from Luntai County to the northwest and 9 kilometers from Koyuk Shahri to the northeast. It consists of inner and outer urban circles.

The ruins of Zhulkut, another ancient city. (Photo courtesy of Xinjiang Institute of Cultural Relics and Archeology)

Archaeological exploration over the past three years shows that the ancient city of Zhulkut contains three layers: inner, outer and high, an unusual configuration, which is relatively rare in Xinjiang and Central Asia. The residential house area of ​​the city is relatively large and is the largest single site among all the ruins in Xinjiang. The Han dynasty relics discovered have the characteristics typical of the Chang’an region, and the artifacts of the Wei and Jin dynasties (220 AD – 420 AD) influenced by local culture have been discovered. Carbon-14 dating has confirmed that the city site was built in the late Warring States period (475 BC – 221 BC) and was abandoned under the Wei and Jin dynasties, and clearly existed in the Han dynasty.

A final step “which location is chosen”

Research shows that the ancient city of Koyuk Shahri is undoubtedly an important urban site on the first Silk Road at the northern end of the Tarim Basin, while the ancient city of Zhulkut was the most central site. high along the northern end of the Tarim. Basin under the Han and Jin dynasties. These clues are of paramount importance in identifying the location of the Western Regions Frontier Command for Xinjiang in the Western Han Dynasty. Both locations have a good claim.

Although there is still no conclusive evidence to help determine the exact location of Western Regions Frontier Command, archaeological excavations have gradually unraveled the mystery of these two ancient cities, laying a good foundation for final identification.

But the most important question has already been answered. These two locations are in present-day Xinjiang, no matter “what is chosen”, the existence of the Western Regions Frontier Command shows that Xinjiang has been an inseparable part of China since ancient times.

The author Dan Zhihao is an associate researcher at the Xinjiang Institute of Cultural Relics and Archeology. The item is translated by Leng Lu and first published by China News Service on September 13, 2021.